Musicto Tell A Tale is a new concept which combines a soundtrack with a serialised story set in the 70’s.

Entitled “Given Circumstances” and echoing the golden age of literature, the story will be serialised over 40+ weeks in bite-sized chunks around 2,000 words.

Accompanied by its soundtrack, (The Back Story) recording why author, Richard Parsons, chose the music, it offers a double whammy of classic 70’s music and accessible modern literature. Fancy an easy read? Like 70’s music? Then this is definitely for you.

‘Be sorry to see you go.’ Biggles is fiddling with his ‘tache as we sit in the staff common room. ‘Are you sure you want to leave?’

‘It’s only an interview. No guarantee I’ll get the job.’

‘What are they looking for?’

In the morning of the twenty seventh of August 1982, the phone ringing wakes me.

I’ve had a disturbed night, despite spending the evening at the Flyer – ‘Another pint!’ I pump money in the jukebox. Happy music only. Norma makes a comment. ‘You look like the cat what got the cream. You won the pools?’ Hands me her glass. ‘A G and T. Double.’…

I’m just staggering back from the Flyer one evening in the middle of August when the phone goes at Orchard Cottage. I briefly consider ignoring it but instead turn down Toto.

“…it’s a feeling you never belonged to me…”

A few more weeks of summer term and that’s it. Five years done. Where have all those years gone?

‘Fuck man, what you gonna do? Slit your wrists? Och. She’s all over you and she’s a real babe.’ …

‘So. Inspection.’ The Big Cheese’s addressing the staff at the beginning of my fifth new academic year. In full swing.

My own relationship with him has gradually morphed from outright fear to grudging respect. In turn, he even occasionally tries to share a joke with me nowadays as if somehow, I too have morphed from dangerous deranged specimen teaching an irrelevant subject to a young radical bringing in valuable and valued new pupils…

The silence between Cher and I thickens; just the piped music insinuating.

“…sometimes I don’t know what I will find…”

This is moving things on. Clive could be in here. Consenting adults. Like with the Femme Fatale. Is that what I want? Is that what Cher wants? Or will it just complicate things? Make things awkward after.

And then something clicks…

I’ve lazed the early weeks of summer holiday 1981 away. Bit of cricket. Bit of social. Lot of thinking. Bought a copy of “Face Value” by Phil Collins which is welded to my turntable.

To my surprise, on the morning of summer school starting, I’m awake early, a stirring in my guts. Why?…

I’m in my study listening to Pat Metheny on the cassette player, holding a letter from The Big Cheese, countersigned by the Bursar confirming a rise in salary next year. “In recognition of your contribution to drama at Fitzrovia.”

It’s warm June sunshine outside with the aroma of fresh mown grass through the open window; a presage to cricket nets in half an hour. At the sound of footsteps in the corridor I thrust the letter into my pocket…

‘Ticket sales are picking up,’ says Hovis Hair a few days before performance. ‘A slow burner.’ She purses her lips. ‘A friend tells me it’s quite violent. Bad language.’

‘It’s meant to be a comedy,’ I venture. ‘There’s an edge to it, but essentially it should be funny.’

She frowns. ‘My husband and I are coming on the Saturday. Is it suitable for children?’

‘I’d exercise some caution. Teenagers, fine. Younger than that probably not.’…

Next morning I’m in my study, still assimilating how I really feel about the previous evening with Miss Dazzle, when there’s a knock on the door. ‘Come in.’

It’s Fizz; flushed in the face; looks as if she might have been crying. Red eyed. Puffy. She should be in school uniform, ready for Sunday chapel, but isn’t.

What’s going on? I turn down King Crimson… 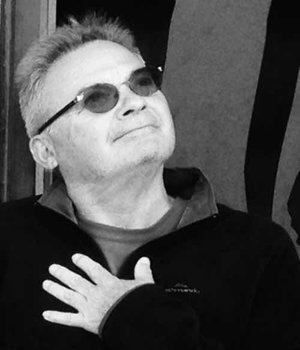 I grew up listening to music from the late 60’s onwards. Pirate pop radio; swapping LP’s with friends; exploring genres; daydreaming over the latest woofer and tweeter. In reality I spent thirty years imparting imperfect knowledge of English literature and drama to young minds in school. Regrets? No. I loved teaching; loved the interaction with the pupils, and made lifelong friends as a result. And what better way to keep up to date with music? I always played stuff in my lessons, and as a result, I’d be bombarded with suggestions from my flock! “Sir! Have you heard…?”