This playlist will give you a taste of the good, the bad, & the flashy in the south

From the southern playalistic generation of Outkast, or 8 Ball & MJG, to the new wave sound of Kodak Black or Rae Sremmurd. This playlist will give you a taste of the good, the bad, & the flashy in the south.

When you think about the south and how it influences todays music you don’t always realize what it can breed into existence. When you think Texas hip hop most would think Paul Wall, LiL Flip, and more. But when I found this jewel I wanted to give you guys a taste of something a little different.

Dimitri Leslie Roger was born in Queens, New York. He is of Haitian descent and grew up speaking Haitian Creole fluently. After his parents’ divorce, Roger moved with his mother to Woodstock, Georgia, a suburb 30 minutes north of Atlanta, when he was 13. His first rap name was Black Boy The Kid, but later changed it to Rich the Kid. Being one of the original artist signed to Quality Control Music along with The Migos he has had to work very hard to stand out among all the talent in Atlanta…

Ok so there are times that an indie artist or in this case duo just catches your attention and wont let it go. If you are from the south then you understand that head nod and face I was making when I heard the 808 drop in this track…

From Pompano Beach, Florida I give you a whole different flavor. Koly P brings back that old street sound that we haven’t heard since the likes of artist like Soulja Slim.  In every record I’ve heard him on you can do much more than hear the delivery of what ever he wants you to hear, but you can feel it with every line…

William Leonard Roberts II , known professionally by his stage name Rick Ross is arguably one of my favorite artist of all time. Not just because he and I are both from Florida or both born in 1976. But because he has over and over delivered some of the greatest music from a hip hop artist.

From  Mobile, Alabama, rapper Yung Bleu (born Jeremy Biddle, 1994) got into the industry in early 2010 after watching his brother interact with local hip-hop circles.  Though rapping since he was 11, he first entered the public arena with self-released mixtapes like 2013’s Hello World before eventually becoming involved with Young Boss Entertainment, who worked with the young artist on releasing some early tracks.  The rapper eventually developed a working relationship with Boosie Badazz, collaborating with him on several tracks and landing a deal with Boosie’s Columbia Records-affiliated imprint, Badazz Music Syndicate…

Fresh from  Bogalusa, Louisiana Jaydayoungan is bringing back a sound that we have probably all been longing for again in the south.  That sound we got when we heard some of the artist like Boosie, Wayne, Turk, Soulja Slim, & more. If you don’t know what sound I’m talking about just continue to play this playlist and we will take you on a ride through history and beyond.

So on my personal timelines I keep seeing a ton of videos from fans doing a dance with their mom, wife, girlfriend, grandmother, or any other female they feel means a lot to them. The track used in the videos is from Algernod Lanier Washington from Fort Myers, Florida better known by his stage name “Plies”.

When I first heard this track I had to share it with everyone I could. Ive been following  Quincy Lamont Williams, better known by his stage name Peewee Longway for quite a while now. And he has done nothing short of impress me with every project he releases.

Every now and then I will keep hearing a track over and over no matter where I got and not realize how much of a gem it is. This next track falls in that category for me.

Derez Deshon is from Clayton County, GA so pretty much Atlanta. He is one of the artist I kept hearing about doing business in Atlanta myself. One day I asked an artist/friend I work with who they are listening to currently and he mentioned Derez Deshon… 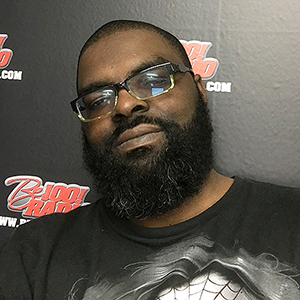 Adrian “Science” Robinson is a producer, audio engineer, & artist manager who has a love for music that stems from a family long history of singing and dancing. He attended the Art Institute of Fort Lauderdale, Florida for music & video production, and later worked very close with one of Florida’s major independent record labels. He has lots of fond memories old and new that seems to tie in with many songs, and loves to share them with others. After working with multiple recording studios, independent labels, & internet radio stations, he moved on to publishing music for independent artist in the independent music community. Twitter: @TrueScience772 IG: @TrueScience772