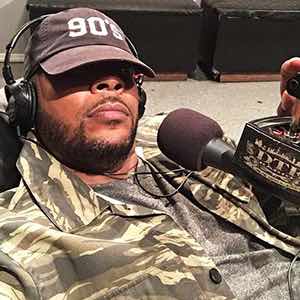 Doran Nelson hailing from the Bronx, New York, upon hearing his first rap record, it was love at first listen. At a time when hip hop was still young, fresh and new he began DJing. Initially Inf began blending his father’s soul records with hip hop instrumentals purchased from the local record stores that his pocket change had become so familiar with. Now, amongst a neighborhood following and growing demand, his freestyle mixes suddenly became valued. Spinning heads as well as records, before he knew it, Inf found himself hosting block parties, school dances, talent shows and as he proclaims “wherever there were people and music…so was I.” Naturally, Doran's appreciation for authentic HipHop music has him in the mix of a lot of tastemakers depending on his distinctive taste for up & coming artist. Today Doran is a DJ over at www.dtfradio.com with partner and friend named Doggie Diamonds Tv which airs live every Wednesday night 7-9pm via tunein app under DTF RADIO.

So This Katt Akeem Tapped into a vibe and sound that only a few can do. Camp Lo, Bruno Mars, Anderson Pakk just to name a few.

Something New From Up and Comer Trapper/Rapper Banks Porter from the gritty streets of the Fordham Road Section of The Bronx.

Those Bronx blocks are nothing to play with. Back in the ’80s it was no place to get caught sleeping, if you did, you would most likely not make it home.

Something new from JI Cue Smoov called Spectacular. This starts off with a vibe and it keeps that consistently throughout the whole song.

Today we get something new from Blu Don Julio called “Bosses Take Losses” where Julio gets deep and personal and reflects on some bad decisions he made in his life.

With Production from Dj Chase Inf continues to release banger after banger in 2020.

If you have something negative to say about East Harlem or anyone reppin red- Billionaire Burke’s “WhG5pty ” video will make you think twice.

Today we get something new from Harlem Spitter Rell with his infectious new single titled “No Mercy” ft. Slayter & Cory Gunz.