As a Curator here at Musicto, we not only get to chat and brainstorm with the rest of our team, whom are dotted around the globe but were lucky enough to meet and cross paths with some brilliant musicians.

This week Jeff Przech and I actually bumped into each other on Twitter and I got a chance to shoot him a few questions about his work.

Przech is as Americana as they come and it’s not a dirty word to throw the country moniker around when describing this album.  If Przech’s influences were trees he’d have an entire orchard full of some of the greats of the traditional and alt-country movements, as well as varying forms of folk and Americana."

So what's the key factor that's shaped your writing and story telling in your music Jeff ?

Experience. Life experiences I'd say. A lot of my songs are autobiographical, but not all of them. I suppose as a songwriter, there's a little bit of me in every song I write whether it's fiction or non-fiction. But even the songs that aren't about me or my life per se are still shaped but my life to this point. It's kind of like Kris Kristofferson said, "partly truth and partly fiction." Writers like Kris, Jason Isbell, and a lot of others really grabbed me because they're songs are so narrative. I try to do the same with my songs.

"Clinchfield Rail" is actually based on a documentary I saw on the History Channel one night years ago. It was a documentary about life in the Southern U.S. and one segment talked about this railroad called the Clinchfield Railroad. Long story short, they had to carve their way through the Appalachian Mountains to get the damn thing built and it took years to do so. It was hard, arduous work and a lot of that work was done by immigrants and young men who just needed the work. A lot of those workers died in the process too. I guess you could call it historical fiction. I wrote the song from the viewpoint of one of those workers.

While were here can you tell me about some of your influencers and how they come out in your artistry and writing?

I have a ton of influences. First and foremost right now would definitely be Jason Isbell. I love the way that guy uses language and turns a phrase. He says things in his songs that haven;t been said before in the way he says them. Anyone that can figure out how to rhyme 'benzodiazepine' in a song... well that's just amazing to me. As I said earlier I also love Kris Kristofferson's writing, also very narrative. Vocally, my favorite has always been and probably always will be Waylon Jennings. My voice isn't quite as deep as Waylon's, but I like to think it's close. I listen to a lot of Mark Knopfler too. Great, simple, understated voice and a ridiculous guitar player. I've always respected Ryan Adams for the prolific nature of his writing. That guy churns out more good songs than probably anyone. There are a ton more, but we'd be here all day!

You mentioned you had Ryan Adams pedal steelest on the track, how did this evolve ?

I did, actually. That was really cool. I knew I wanted pedal steel for Clinchfield Rail, and Jon Graboff's name was the first one I thought of since I'm such a big Ryan Adams fan. Well, Ralph Mooney is the first name I thought of, but he's long gone unfortunately. I just reached out to him through Facebook believe it or not. I asked if he'd be willing to play on a track and he said sure. That was really it. We sent everything back and forth through email - I've never actually met him. I was really humbled by the amount of time and effort he put into the song. He emailed me a bunch of times with different ideas wanting to get it just right. I'd say he did so!

I've been reading up and I hear your working on a new album with "The Outfit", when can you expect to have it completed, and are we up for some of the same great sounds and storytelling?

Well the storytelling is a big part of my writing, so yes, that's definitely still there. As for sounds, this record has more electric guitars on it - a lot more twang. There is one song on the record called "The Willows" that is a very sparse acoustic track. I wanted it to sound like an old Waylon song from the mid-70's. The record is almost done. My guitar player needs to do a few more overdubs - for the most part we recorded everything live in the same room - and my daughter needs to put a keyboard track on one song and that'll be it. After that it needs to be mixed, mastered, and pressed, so we'll see. I hope by Halloween it'll be ready to go, but we shall see.

"In a world where so many artists are employing marketing gimmicks and studio tricks, vying for the next big spotlight in the music scene, Jeff Przech makes it abundantly clear that's he's here to do one thing, and that's make great music."

It's been an absolute pleasure, having you share your time with us all Jeff.

Equally awesome to cross paths with you! It's pretty cool to know my music has reached Australia. Very humbling too. Thank you very much for reaching out and for the kind words. They are much appreciated.

As for the listeners out there, I hope you all enjoy the track this week " Clinchfield Rail" as much as I do and If you'd like to know more about Jeff Przech and follow him on his musical journey for updates, news and gigs go to http://www.jeffprzech.com/about.html or follow the social media links.

You can learn more about Jeff Przech here:

About the Curator - Chris Mccann:

Drawn to music from an early age, Chris' first album was The Beach Boys - Good Vibrations, a record he'd spent weeks saving up his pocket money for.  Now after many years of second hand vinyl markets and countless concerts and festivals, Chris a painter and decorator by day, continues to chase the dragon for that next cool music discovery.  Raised in Brisbane and now operating out of Noosa on Australia's sunshine coast, you can learn more about Chris at https://www.noosadecorating.com/ 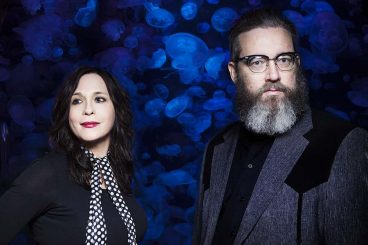 Far From Any Road – The Handsome Family

A dark dusty track, used in the introduction to the instant cult classic – “True Detective”.

Sadly we’ve lost Damo but his music will cement his immortality forever.

If the Devil had a bastard child I think I just found him.